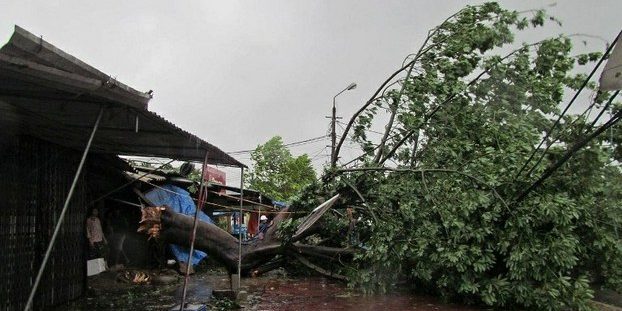 Saigon Translation Global called upon all of its emloyees’ generosity to donate through Phap Luat Viet Nam newspaper to support relief operations for those affected by Typhoon Wutip. “We are terribly saddened by the loss of life and property caused by the direct hit of this strong typhoon in Vietnam’s Central Region,” said Saigon Translation CEO Louis Dinh.

The storm uprooted trees, cut power lines and damaged more than 1,000 houses. There was no immediate word of injuries, flooding or major structural damage.

Vietnam’s national weather center said Wutip had weakened from a typhoon to a tropical storm by the time it made landfall. It was packing sustained winds of 117 kilometers (73 miles) per hour, it said.

Officials evacuated tens of thousands of people from the storm’s path over the previous day.

By nightfall, Wutip had blown the roofs off of more than 1,000 houses in one district alone, local government official Pham Huu Thao said. TV footage showed uprooted trees and deserted city streets in central towns close to the storm’s center.

Wutip sank at least two Chinese fishing ships as it neared the coast near the Paracel Islands, leaving 75 fishermen missing, according to the website of the Hainan government in south China. Two vessels sank Sunday and contact with a third has been lost, it said.

Wutip was the strongest typhoon to gather off Vietnam this season. The most powerful Asian storm this year was Typhoon Usagi, which caused at least 33 deaths in the Philippines and China earlier in September.

Vietnam is prone to floods and storms which kill hundreds of people and cause millions of dollars in damage each year.